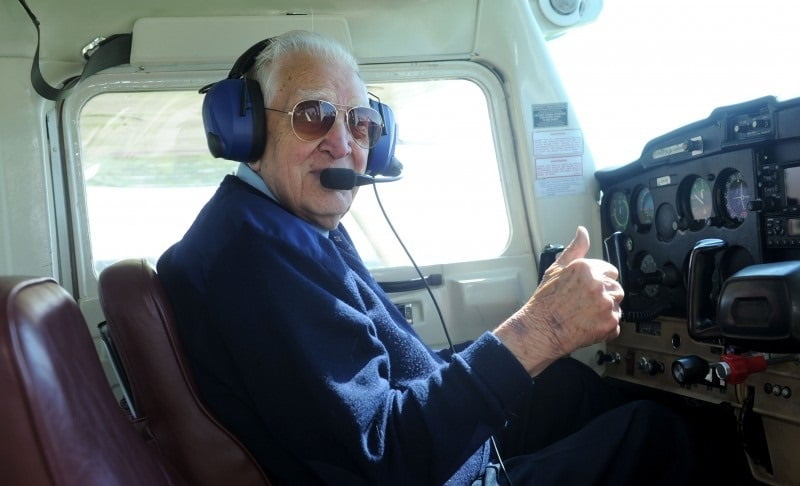 You love flying and you might have dreamt of being paid to fly an aircraft. Your dream may have been to become an Air Force or Airline Pilot or even a Flight Instructor.

Unfortunately, somewhere along the way, you gave up on your dream of being a pilot and you settled for a comfortable (and easier to achieve) job. As each year passes, your dream of eventually becoming a Commercial Pilot seems less and less likely.  However, if you still have that desire, and you’re thinking that another 20 or so years being stuck in a dead end job that you’re not passionate about, is just like undergoing daily root canal therapy, then read on.

How old is too old to learn to fly?

I have trained some student pilots in their 70s who made me feel unfit standing beside them. So there are a lot of exceptions to every rule, and my suggestions are by no means gospel. If you’re learning to fly for fun, I would say 80 years old would be the cut-off, if you are in good health.

If you are looking to fly for a career, then this obviously changes the maximum age. What type of pilot you want to become will determine what age would be too old to change careers and start your flight training journey.

In fact the 40-45 age bracket has an advantage for smaller regional airlines, as the airline knows that you will not move onto a major airline, so the time they invest in your training is well worth their risk of employing someone slightly older.

If you’re willing to travel to remote locations you can still get a job in general aviation as a charter pilot even in your 50s. I worked for a large charter company in the Northern Territory and they regularly employed pilots in their late 40s and 50s as they knew, once again, the airlines would not poach them. As it’s expensive to train new pilots, it makes economic sense to retrain?? older pilots, particularly for smaller charter companies where keeping training costs low is critical.

There are a lot of charter companies in remote areas of Australia which carry tourists and mine workers. Many of these charter companies fly modern turbine aircraft and offer a lot of variety and flexible work hours.  I would suggest the cut off age to become a charter pilot would be around 50.

With the global pilot shortage and the growth of recreational flying, there will always be a need for flight instructors (well, until we have self-flying aircraft in about 10 years, anyway)

The good news about growing old is that many students prefer instructors who look older, as they assume they are more experienced, plus, you have more life experience and skills that can be applied to assist your students in the training environment.

I would suggest that the cut-off age to start learning to fly and becoming a flight instructor would be 55. Please remember these are only suggestions and there are ALWAYS exceptions to every rule.

Stop using your age as an excuse

I have met a lot of students who hate their jobs and want to change careers but they often use their age as an excuse for why they can’t. The real reason is not usually their age but their fear of failure.

We tend to fear failing at something that we are passionate about. When you take on something new and you’re and you cannot be certain of the outcome, fear will creep in. Your mind starts thinking ‘What if I lose all my savings? What if they they laugh at me? What if I have an accident? Is it fair on my partner for me to stop earning while I learn a new skill and apply for jobs?’. It’s easier to stay in a job you hate, and complaining to everyone about it, because at least you can predict the outcome.

It’s too embarrassing and maybe even confronting to tell everyone the truth: ‘I’m not going to chase my dream of being a pilot, as I’m really afraid of failing and being called a fool for trying’, so we use age as an excuse not to be a pilot. It’s hard for people to argue with you because most individuals have no idea what too old is (including yourself!)

I’ve written this blog so you can stop the excuses and begin to seriously consider starting your journey to fulfill your dream.

How much will it cost?

Another excuse is the income uncertainty. I am always amazed at how many individuals would prefer to earn a high income in a job they hate, than work at a reduced income but in a job they have a passion for. We all need money to live, but wasting half of your waking hours working at a job you hate just so you can earn a good income, is crazy.

So how much can you expect to earn as a commercial pilot? Below I have outlined some basic wage expectations once you have secured full-time employment in Australia:

One of GoFly Aviation’s most recently hired flight instructors gave up a corporate job in Sydney and moved to the Sunshine Coast with his wife and young child for a lifestyle and career change. He is in his early 40s.

He is now earning half of what he was being paid before, however he regularly tells me how happy he is and how much better his life is, now that he is living in one of the most beautiful areas in Australia.

Just focus on the first step

When a middle-aged person comes into my flight school and tells me that they have always wanted to be a commercial pilot but they think they are too old, I tell them not to focus on the entire training or the time that will be required to become a commercial pilot. Instead, I tell them to just start learning, and o complete the first part of their training. If they enjoy it and succeed, then they start and complete the next part of their training. It’s easy to plan and achieve smaller steps along the way to our goal, and a lot less intimidating.

Also, sometimes you don’t really know if your dream is right for you until you actually start to follow it. Taking small steps towards your dream will confirm you are on the right track. Worse case scenario is that you don’t enjoy it, and guess what? You’ve learnt something about yourself and you can move onto doing something else which is better suited to you.

In the last 25 or so years that I have been involved with the aviation industry, I cannot think of a more optimistic time to be a commercial pilot; there are plenty of jobs – even if you are older -and I do not see this changing for some time. Remember the famous words of Henry Ford ‘If you think you can, or you cannot, you’re right’.

If you’re still not sure whether you’re too old to change career then I suggest you research your local flight schools and book your first lesson, and then you can decide. You don’t want to get to your 80s, still in fairly good health, thinking: ‘You know, I really should have done something that I loved for the last 30 years’.

The regrets in your life will always weigh more heavily on your mind than the mundane and comfortable times of your life!