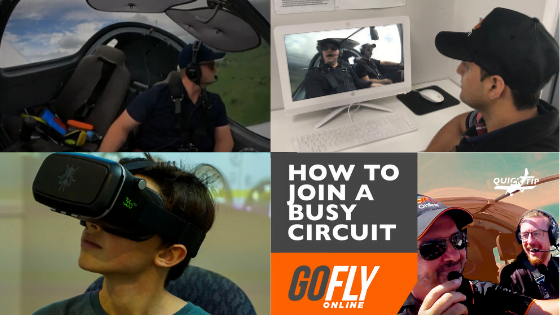 In 2014 I decided to make the first Australian ‘Recreational Learn to Fly’ DVD series. The reason I created the DVDs was because I discovered students were not remembering everything they learned during their flight lessons and they wanted a way to both remember what they had learnt on that particular lesson as well as a way of preparing for the next lesson.

I advertised the DVDs in print magazines and posted them out when people ordered them.  The DVDs sold very well and received excellent feedback from both students and instructors across Australia. About two years ago I considered upgrading the DVDs to an online version and also thought, ‘Wouldn’t it be fantastic if we could also offer the inflight lessons in 360-degree video so it can be viewed on a VR headset?’.

The main issue at the time was internet speed and there were not many VR headsets available and they were very expensive. Added to this, the 360-degree cameras were also very expensive and editing the footage was labor intensive if I did it myself, or very expensive if I got a production company to do it. As the flight school was very busy, I decided to put the upgrade project on hold.

I am a firm believer that if you are on the right track then the right people and circumstances will show up in your life to help make your dreams a reality.

In 2016, Stephen, the owner of a production company (Light Studios) rang me wanting to make an online reality tv show at GoFly, about his own journey from nervous flyer to potential pilot. We started making the show, called Taking Flight. We filmed Stephen’s flights and, coincidentally, his production company also created 360-degree videos.

Over the next 6 months, Jeremy (GoFly’s then General Manager), Stephen and I put our creative hats on and filmed the world’s first 360-degree learn to fly videos to be available on the Vimeo On Demand platform.

Creating the 360-video was not an easy process. Firstly we had to purchase an expensive VR camera that used two 4k cameras and two spherical lenses. We mounted the camera on a special tripod on the student’s seat so the camera was situated exactly where the student’s head would normally be.

Over the next six months I then filmed every Pilot Certificate lesson in detail pretending the camera was a real student. We had many retakes and the biggest bugbear was that the camera kept overheating in the hot Qld sun and so we had to shoot in 20 minute sessions, wait for the camera to cool down then shoot again! The other issue at the time was that the sound had to be recorded on a separate camera then synched to the 360 footage during the editing process.

When shooting footage there is generally six times as much footage as ends up in an episode, so the raw footage used an incredible amount of data storage to get it through the editing stage. After three months of editing, Stephen finished all the lessons in March 2017.

We used the 360-videos as training aids at our GoFly Aviation school and the feedback was fantastic. The 360-video can be viewed through any mobile device in 360 format with a $25 VR headset (prices have come down in the last few years). The benefit of watching the learn-to-fly lessons in the 360 format is that you are completely immersed in the cockpit and you can see exactly what the student pilot sees in 360-degree HD video.

Fast-forward to 2018 and by then we had shot all RPC ab initio lessons and now had over 22 episodes of Taking Flight on the Vimeo platform. Our students were using it at the flight school and were also able to use it at home online or offline.  But it was hard for other customers to find on Vimeo or via our own website and it just wasn’t selling as a stand alone product. I truly believed that these videos would reduce training time for students, enable them to save money and make them a better and safer pilot.  We needed to create a standalone website just for our videos.

I approached one of our existing students, Thomas Gregg,  who ran a web design/SEO company in Brisbane. He agreed to come on board and design the GoFly Online site, complete with categories for RPC, Cross Country, Resources, Interviews with Pilots, the free GoFly Fix videos, blogs and much more. We put a plan in place for further videos and sought out a Commercial pilot to produce some GA videos.

My reading led me to believe that having an online side to the actual flight school business would help us survive any downturns in the economy. I also discovered a new suffix for websites,  so we changed from ‘dot com, dot au’ to ‘dot online’. We divided the content up into Free as well as, Basic and Premium content by subscription ($99 or $199). By now we had over 100 videos and 25 blogs.

At GoFly all new students receive a free Premium subscription. The new website looks great and we project it onto the wall or screen it on the work computers for those who haven’t watched the relevant lesson at home or need to watch it again. Some students listen to the audio as a refresher, as they drive to the school. Despite my partner’s best efforts at promoting it, it still wasn’t selling to anyone outside our own school.

To eliminate price as a barrier to purchasing, we provided a monthly option ($9.90 or $19.90) and we included a 7 day money back guarantee. We attended aviation expos and demonstrated the product and gave out business cards containing the URL. We made more content. We released free content linked back to the URL. We placed ads in a couple of aviation magazines. Finally, some sales started trickling in from around Australia and gave us the motivation to keep at it and the confidence to buy some new equipment for filming..

In late 2019 our flight school leased a Cirrus and we partnered with a GA pilot to produce some Cirrus and GA content. We have also filmed interviews with a number of commercial pilots. We have plans to include a quiz at the end of each video so students can test their understanding of the lesson and, eventually, their instructor will also be able to access these results to see if the student understands.

We won’t give away any of our exciting future plans, but there are plenty. Our vision is for GoFly Online to create the largest collection of quality inspirational, educational and entertainment aviation videos on the planet. Our aim is to inspire individuals to fly and, once started on their journey, make the process as enjoyable as possible and help create better pilots!.

You can now access all content with the 7-day FREE trial and we have made the first couple of flight lessons in each category on the site, free to view. Enjoy!

Click on this link to read further aviation blogs by Damien.