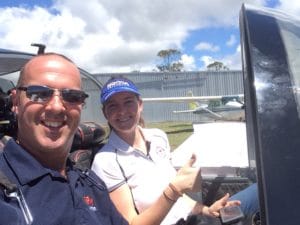 As the Chief Pilot and owner of a busy flying school, one of my main roles is making sure our customer’s expectations are met. This comes down to clear communication on how the student’s flight training course will progress even before they complete their first lesson.

The good news is that 99% of students get it, and what I mean by that is they clearly understand what the flight school expectations and their own expectations are and what is required for them to pass their flight test to achieve their Pilot Certificates. (I am also not suggesting that all flight schools get it right all of the time – including myself – for instance, some students get along better with certain instructors than others and learn better with a certain personality type. This happens in all service-based businesses.) By all means if you have a legitimate complaint with your service or training then speak up, we want to hear from you. The 1% of students I am referring to are those who make flight training more difficult than it has to be for themselves and for the flight school.

Below I have outlined some of the typical behaviours of the one percent of students who don’t understand how flight training works (even though we have explained it to them numerous times) and who are always the first to complain when things do not go their way.

I just have to show up

That’s right, they think that just showing up and going for their flight lesson will get them across the line. They have forgotten that flight training is a 50/50 partnership with their flight instructors and they still have to put at least 50% of the effort in to get themselves across the line. This includes study and or practicing their flying procedures when they are not flying.

Money will get me across the line

They believe that because they are paying for lessons that they are owed a Pilot Certificate or licence. I explain to every customer when they start, that flying is competency-based. This means that you have to meet certain competent levels to pass certain milestones in your flight training. If you don’t meet these competency requirements we simply cannot send you solo or pass you during a flight test.

This one is related to money and many new customers see the minimum legal hours and think that everyone gets their licence within that time. It does not help that a lot of flight schools quote the minimums and do not explain to the customer that only a small percentage of their customers obtain their Pilot Certificate in the minimum time.

I don’t take criticism too well

Flight training is two steps forward and one step back. Eventually you will get there but there are days when you will not perform very well. As an instructor, it is our job to identify weaknesses and communicate that to the student so they can improve. Some students do not like to receive any critical feedback and they see it as an attack on their ego.

My friend went solo after ten hours so why haven’t I gone solo yet?

This one is a common one. They compare and compete with a friend or family member who has done some flight training and think if they have not achieved the same result that the school is to blame for their shortcomings or they begin to question their own talent for flying. The truth is that no two students are the same. I have had students go solo in record time and others take twice as long; everyone learns at their own individual pace.

Many students cannot own the fact that their performance, or attitude, or nerves are affecting their ability to pass or reach a certain level. These performance issues can be affected by a host of human factors issues such as age, health and stress or just different learning styles.They can also be affected by the varying and complex personality types that humans possess.  Many of these students will blame their instructor or the weather or any other external factor without accepting that the issue is actually themselves. The roadblock is something they need to work on within themselves.

I once failed a young student after he completed his flight test and his Dad was very angry at me for failing his son. He insisted, “But you said he was ready for a flight test”. I calmly explained that yes, he was ready for the flight test but today he was not ready to pass that test. The poor student did his best but did not perform on the day due to nerves. His dad clearly did not get it; his attitude was that you advised that my son was ready and I paid you, so you should pass him.

Flight Training is about self development

Your Flight Instructor is a skilled guide and motivator who creates a safe structure for you in which to learn how to fly and achieve your dream. However it is up to you to humbly take the constructive criticism, incorporate the feedback, do the study, improve and grow.

Your Flight Instructor cannot get YOU across the line, they can show you the way but only YOU can get yourself there.

Your hard-earned money will allow you to hire a plane and an instructor but it’s actually YOU who determines how the flight training will progress and if you will eventually realise your dream of flight.